Architectural Photography: Ways to Inspire Creativity looked at how architectural students could observe their immediate environment from behind the lens and frame interesting on-goings better by using the principles of photography.

About the expert: Gurusiddhappa is an acclaimed artist and teacher associated with many institutions. He has studied at the Karnataka Chitrakala Parishath, Bangalore and at the Faculty of Fine Arts, M.S. University, Baroda. His works have been a part of numerous shows, exhibitions and auctions in Mumbai, Delhi, Chennai, and Bangalore. He was awarded the 46th National Academy Award by Lalit Kala Academi (National Academy of Art), New Delhi in 2004. He has also received scholarships from Arnawaz Vasudev’s Charities, Chennai & Bangalore (1999-2000) and the Karnataka Lalit Kala Academy (2000). He is currently an Associate Professor at Acharya's NRV School of Architecture, Bangalore involved with teaching Photography and Basic Design.

Day 1 (16/08/2021): Students were introduced to the history of photography and about how it is linked to the other visual arts.

Assignment 1: The Selfie experiment – Students were asked to click their faces from angles and in lighting that they have not yet explored in monochrome. Review was given for the same.

Assignment 2: Photographing your work – Participants were asked to photograph their own architectural / basic design models with white or black backgrounds preferably outdoors. Students who did not have their work photographed household objects. Review was given for the same.

The day ended with introducing a few principles that could be used while photographing.

Day 2 (17/08/2021): Continuation of introducing 18 principles of photography. Reference photographs were shown and discussed to explain the same. Some of the topics covered were rule of thirds and frame within frame. Light was taken seriously under topics such as follow the sun and night photography. Some ideas from basic design such as symmetry, patterns, textures, lines were also introduced. Specific architectural elements such as ceilings, staircases, pillars were covered along with other architectural concepts of balance elements in space, and sense of scale. Different angles were explored such as worm’s eye view and bird’s eye view.

Students were given two breaks during the day to get back with interesting photographs that they captured based on the above mentioned principles and discussions on the same were held as they were reviewed.

Day 3 & 4 (18 & 19/08/2021): Students were given two breaks during the day to get back with interesting photographs that they captured based on the above mentioned principles and discussions on the same were held as they were reviewed.

Remarks: The participants found the workshop engaging and immersive, as was mentioned at the end of the workshop. Since it was hands on, the participants were active and kept coming back with interesting work to discuss in spite of the constraint of being in their houses. The positive outcome of a scenario such as this was that photographs from different parts of India and the world poured in, which brough in diversity to the collection. 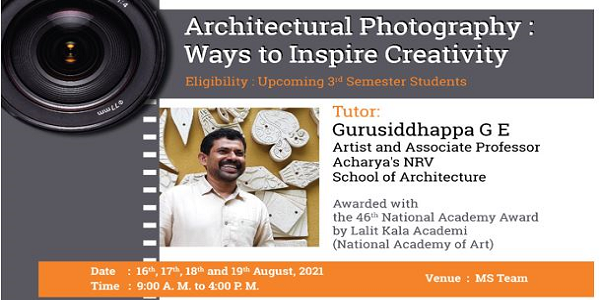