Takeaways from My First Job 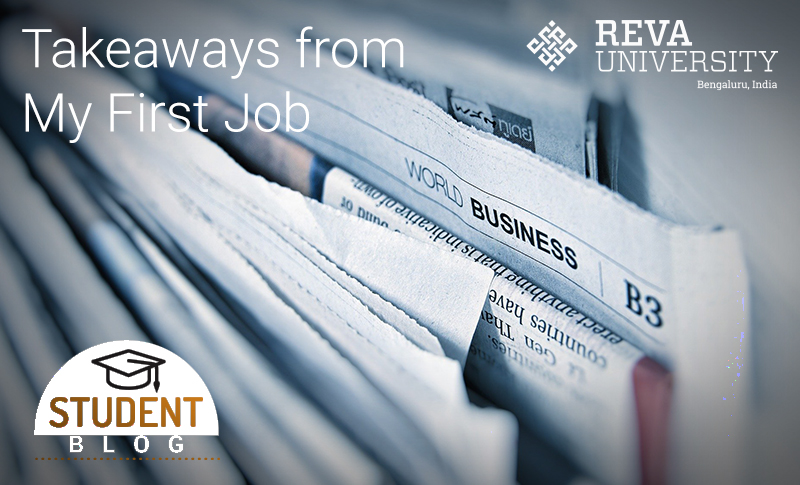 As students, a unanimous aspiration is to be job-ready and understand the challenges of work-life while still you are in the safety nets of the University. Although an internship gives a glimpse of the difficulties of a job, it’s only when you become a professional, you understand the nuances and challenges of employment.

At REVA, we want our students to be job-ready and we aspire to nurture an ecosystem that will facilitate our goal. This blog will summarize the learnings of a student from her new job, the challenges of adjusting from student life to work-life, and tips to prepare for the job.

We bring the story of Jahnavi. T.R, a fourth-semester student of MA in Mass Communication and Journalism at REVA University. Jahnavi has recently joined the popular English daily Deccan Herald as a Reporter, and she shares her journey with us.

Speaking about how becoming a Reporter was her dream since the age of 6-7, as clichéd as it may sound, Jahnavi says movies inspired her to become a journalist!
She says, “I must have been a six or a 7-year-old when I saw the role of a journalist in a movie. Soon after, I was carrying a notepad and a pen everywhere, making my own ‘news reports’, imagining myself to be a journalist. However, as I grew up, I understood the various aspects of journalism and in my under-graduation, I realized becoming a journalist was my true calling.”

Jahnavi joined REVA University for MA in Mass Communication and Journalism, and this is her final year at the University. About two months ago, she landed herself a job as a Reporter. Although every day is new learning to her on the job, she shares her learnings so far from her first, dream job. As a journalist, she says:

Make Conversations
Talking to people – auto drivers, vegetable vendors, fruit sellers- just anybody and everybody around you makes a lot of difference! As a journalist, it’s important to talk to all people from all walks of life to understand their challenges and everyday problems. Most often, this could be the first hint for a news story and could further lead to other stories that are interconnected with them. They could even share information that can lead to exploring a story from a news angle.

For example, a story on many accidents due to potholes in a particular neighborhood could also lead to traffic, traffic infrastructure, and resource management type of stories. Two agencies – BBMP and the City Traffic Police- are involved and could be interconnected when writing a story on such topics.

Network. Network. Network
From meeting the right people who can give accurate information to meeting bureaucrats who can verify this information, it is important to network and build sources. As a journalist, one gets to meet bureaucrats at public events, launches, government announcements, general events, or at government offices. It’s important to stay connected with the right people to file breaking stories and build strong sources.

Build Sources
The key consequence of networking is building sources! Most often, the government agencies or representatives of these agencies refuse to divulge any information. Especially, if it’s a major news development or a controversial affair, the bureaucrats refuse to comment. On such occasions, it is important to have sources who can give accurate information.

No routine is THE routine!
The most challenging part of being a budding journalist, according to Jahnavi, is the fact that journalists have an erratic schedule. They will have to attend assignments at 9 AM on somedays and events at 9 PM on certain occasions. Hence, willing to work without expecting 9-5 routine is the key aspect of getting adjusted to this job.

Work Experience Helps
Jahnavi says she had freelanced as a content writer during the lockdown while she was still in her first year PG course, and stresses that this helped hone her writing skills. With better writing skills, it’s easier to convey a story with a message.

Jahnavi concludes that staying determined to what you want to achieve and working towards the aspiration will definitely help you reach your goal!