Malleswaram is a historic neighbourhood located in the rapidly expanding Bengaluru city. The neighbourhood was one of the planned extensions of the city as an aftermath of the city planning initiatives undertaken after the plague also known as Black Death had ravaged through the city in the 1890s. The neighbourhood was planned on a grid iron layout with community wise segregation of plots. The aim of the heritage walk was to acquaint the students with the living tangible and intangible heritage located in the midst of our city which manifests itself in form of colonial bungalows, heritage eateries, historic market places as well as ancient temples. The latter half of the day was devoted to extensive study and detailed documentation of 3 historic temples in the neighbourhood.
The heritage walk began at 7:30 AM from the Chitrapur math circle at Malleswaram. Ar. Roshini M led the heritage walk, explaining the various facets of history that lie scattered throughout the lanes of Malleswaram. Some of the important buildings covered over the span of the 2.3 kms long heritage walk included Panchvati( residence of Sir CV Raman, Chitrapur Math, Vema lodge, Malleswaram flower market, Govt. Girls’ high school, demolition site of Villa Potipatti etc. Apart from the above major landmarks, Ar. Roshini also pointed out the various styles of colonial bungalows and early apartments that came to dominate the urban scene of Bengaluru. Students were able to observe bungalows in classical, gothic and art deco styles along with gaining an understanding of urban planning scheme as seen in the layout of conservancy lanes through the neighbourhood.

All 3 temples are under the state archaeological department and bear significant heritage value in terms of their historic context, built structure as well as rituals and traditions which are an inseparable part of their existence. While the Kadu Malleswara temple has its origins in the 15th-16th century, the Nanditeertha temple was a surprise discovery during excavations done by a private developer just a few years back. The Venugopalaswamy is a Vaishnava temple and has features reminiscent of the Vijayanagara style of architecture.

Students were divided into 11 groups spread across the 3 temples to document the built structure of the temples. Faculty members guided the students through the documentation process including measure drawings, photo, video and sketch documentation of planning, ornamentation and structural aspects of the 3 temples. The documentation study will indeed prove to be a great learning experience for the students as they prepare their History of Architecture portfolios for the semester end examination. Furthermore, the visit has exposed them to the need to understand and preserve the heritage structures in our city. We thank the team and management at REVA University for their constant support and encouragement towards all our endeavours. 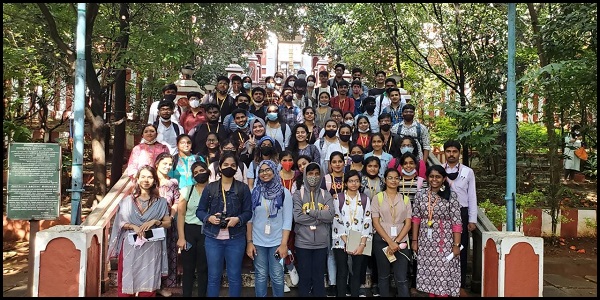