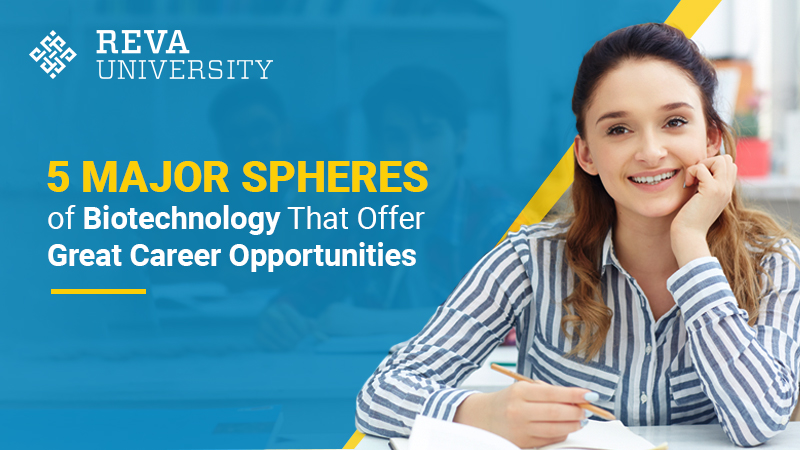 Biotechnology, taught in the best MSc Biotechnology colleges in Bangalore and other parts of the country, is a field that comprehensively studies ways and methods of different biological systems and procedures used to create products or processes supported by the new-age technology. The results obtained from these procedures help in addressing a large number of problems in different industries. Biotechnology has an interdisciplinary nature, and as a result, it plays a crucial role in creating various products and newer technologies.

Some of the major spheres or subdomains of biotechnology include the following:

There are also some subdomains of biotechnology that have always helped the global medical sector in its evolution over time. These include:

Career opportunities in medical biotechnology at a glance

After completing your MSc Biotechnology in Bangalore, you can grab various lucrative job opportunities in the areas that include:

Some of the major job profiles for postgraduate degree holders in the field of pharmaceutical biotechnology include Medical Scientist, Chemical Engineer, Biological Technician, and Chemical Technician.

Plants have always been a very significant source of a large number of raw materials for countless applications as well as food. The dependency of human beings on plants is not any secret. Apart from this, plant biotechnology has also got a very crucial role to play in the following problems in the agriculture sector:

Over the past few decades, the Genetically Modified Crops resulting from genetic engineering have played a crucial role not only in the betterment of crop quality but also in developing abiotic and biotic stress resistance in various crops. The example of BT cotton can be cited here as the finest one having unmatched insect resistance. Flavor Tomato Crop has also resulted from recombinant technology.

The ever-increasing human population across the globe is always considered to be in proportion to the demand for food. Food biotechnology has emerged as the savior of mankind and has helped in surmounting various problems related to better food preservation, food processing, and the challenges associated with increased food production. Apart from this, food biotechnology has also helped bring out a large number of alternative food sources.

The single-cell proteins derived from the making of value-added food products and a large number of microorganisms are the finest examples of the same. Food biotechnology has also been a critical tool to create newer other technologies that have not only taken mass food production to the next level but also enhanced and bettered the production mechanism, processing, preservation, and even packaging of food.

As far as the career scope in the field of biotechnology is concerned, the opportunities are almost endless. Some of the major designations to be claimed include Quality Manager, Food Technologist, Regulatory Affairs Officer, Technical Brewer, Nutritional Therapist, and Product Development Scientist. The entities that hire food technologists across posts are Storage Units, Research Units, Laboratories, Food and Beverage departments, Food Marketing, and Processing and Distributing Units.

Environment biotechnology is relatively a new term in the field of biotechnology. This is a branch of science that aims at restoring the balance between diversified human interests, ecology, and nature. Bioremediation and biological intervention are possible only when the new-age techniques of biotechnology are applied. Ever since its discovery, the management of waste plastic has been a serious issue. Oil spills and the accumulation of heavy metals on a large number of natural resources such as water and soil have always been an issue of serious concern.

As discussed in the blog above, biotechnology is one of the fastest growing branches of science and its intervention in human affairs is growing with each passing day. Any breakthrough in science and technology opens various new avenues for those who are eligible and have a flair for the same. Biotechnology is still in its infancy and a lot needs to be done in it for the welfare of the entire human race. And, all this will call for more people to be actively involved.